This particular enquiry came from a Chartered Surveyor, who was acting for a young couple intent on purchasing their first house and our surveyor David Morton CSSW attended the property.

David was able to inspect the sub-floor areas and the structural timbers of the floor structure. It was clear that previous repair works had been carried out in a number of different areas but carried out to a poor standard. It was observed that there was a severe lack of adequate sub floor ventilation due to many decayed timbers and debris from past repairs blocking the sub-floor air flow. In addition a number of sleeper walls were in a very unstable condition. There was also widespread evidence of wood-boring insect infestation.

PTL’s recommendation was to completely remove the floor structure and replace with new pre-treated timbers as the only real effective long term solution. Trying to carry out further repairs was not an option!

PTL’s advice & recommendations were accepted and when the purchase was completed PTL was called in to carry out the necessary works.

As is often the case when exposure works occur upon removing the old floor structure it became clear that there had been many attempts in the past by others to carry out ineffective repairs. Exposure works revealed significant amounts of rubble and rubbish which had to be cleared to ensure adequate sub floor ventilation! Then it started to rain! And we found that there was water pouring from a blocked down pipe into the sub-floor area caused by a split in the lower sections of the down pipe due to vegetation and root growth!! PTL used their technical skill and their knowledge of water stop products to plug the wall internally to stop the flow of water whilst the client, along with his father replaced the external down-pipe in order to stop further water ingress.

The client was very happy with the work carried out by PTL and managed to move into their new home as soon as the work was completed by PTL. 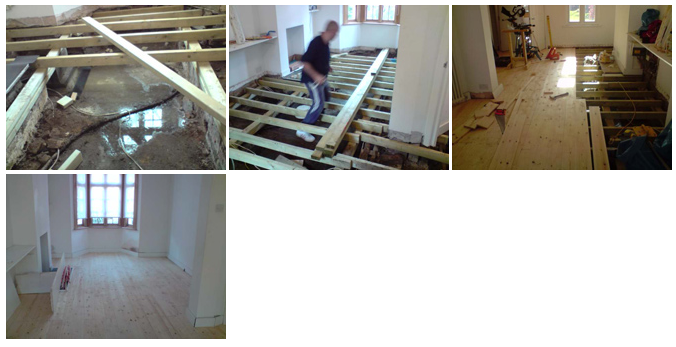