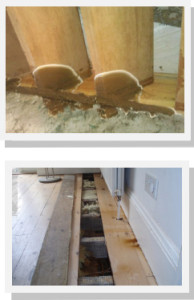 The owners of this property in Chiswick, London discovered a dark red/ brown coloured dust appearing in the cellar and ground floor areas. They were concerned as they did not know what the dust was or the reason for its appearance.

Our surveyor discovered the reason for the extent of the attack was due to an excessive number of sporophore growths from the dry rot fungus (Serpula Lacrymans), releasing millions of spores into the damp atmosphere.

The source of the moisture supporting this infestation was a leaking water pipe in the corner of the kitchen. Under floor heating had exacerbated the problem, with inadequate ventilation causing severe sub-floor condensation problems.

A complete replacement of the kitchen floor was required, together with replacing and treatment of the floors either side of the kitchen, including the steps leading down into the cellar, using fungicidal fluids.

With careful attention to detail, Preservation Treatments were able to save the original tiled floor surface in place to the central hallway.